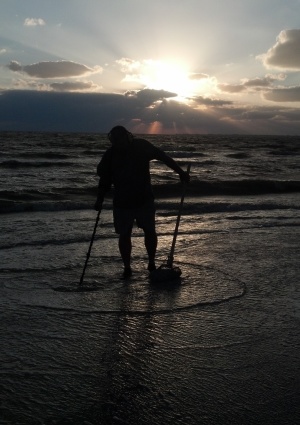 I work on a reward basis that is agreed upon in advance. (That means you pay what you feel item is worth for me to come out and search for it and reward must be agreed upon prior to arrival. If lost item is not recovered, you only pay trip fee.)

A minimum trip fee of $25 is charged to cover cost of fuel. This fee is charged even if the lost item is not recovered.

Beaches: wet or dry sand or up to chest-deep water. Yards, Parks, Home sites, Athletic fields, Gardens, Estates, Insurance items recovery etc. Would be willing to assist local police/authorities in crime scene recovery. Items most generally called to look for: Jewelry (rings, necklaces, watches etc.), keys, coins, gold, silver, survey markers, cell phones, heirlooms, relics etc. (Please note: Permission must be obtained to hunt for an item lost on private property. Normally permission is obtain by you from land owner and/or proper authority and is assigned to me. Generally, people are very understanding in these circumstances and permission is granted.)

My interest in metal detecting started in Indiana. My wife and I lived around several fresh-water lakes where summer tourists like to boat, swim and fish. Several pieces of jewelry, keepsakes and cell phones were recovered. Since then we have been "hooked" on this hobby. Over three years ago we moved to Florida and have continued metal detecting and is a hobby we enjoy doing together--especially beach/water hunting. Most times we will look for your lost item together which will double the chances of recovering it--two for the price of one! Between the two of us, we have four metal detectors--Minelab and Whites, so we have the proper tools for any situation. We are self-employed and most times can be available on short notice. Time is of the essence as Flordia beaches are heavily detected. A detectorist may find your lost item without knowing the rightful owner and keep or sell for scrap. We truly love recovering lost items for their rightful owners. We will help in any way we can and are happy to answer any questions you may have. If we don't answer your call, please leave a message and we will call back as soon as possible. We work around loud machines and don't always hear phone ring.